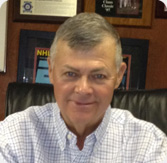 The restaurant business is in Don Carson’s blood. The son of legendary Chicago restaurateur Chris Carson, Don is also associated with one of the city’s other leading restaurant luminaries, Richard Melman.

Carson, who oversaw operations at Don & Charlie’s eatery in Scottsdale, Arizona, is a Managing Partner in one of the nation’s leading restaurant organizations, Lettuce Entertain You Enterprises, Inc.

Carson was raised in Rogers Park, which is located on the North Side of Chicago. Growing up in a restaurant family, Carson remembers dining out three to four days a week as a young boy. While growing up eating, tasting and trying new food items Carson learned to appreciate food that was prepared from scratch with no thought ever given to skimping on quality.

Carson began his career at the Millionaire’s Club Library and Carson’s, The Place for Ribs, before teaming up with Melman in late 1982. At Don & Charlie’s, their goal was simple, be the best that you can be and always care for your guests.

Although restaurants are his full-time passion, he does save a little energy for jazz and softball, his part-time loves. Carson is the father of three girls.