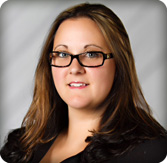 When Rosalyn Gibbs Dawson began considering a career, advice given to her when she was about 5 years old resurfaced and resonated when a friend of the family told her to find something you love to do and then find someone to pay you for it.

She loved learning about business and marketing but was not particularly intrigued by the kitchen. Always up for a challenge and wanting to challenge herself outside of her natural ability, Rosalyn surprised her family and friends and enrolled in culinary school at the Art Institutes International Minnesota.

Rosalyn learned about Rich Melman and the passion driving the success of his restaurants on the first day of classes. Before long, she fell hard for the energy, excitement, and creativity of the hospitality industry. It was an ideal fit for someone whose strong work ethic was instilled at 14 while working for an interior design company in her hometown of Rogers, Minnesota.

After graduation, Rosalyn worked as a kitchen manager before becoming a part of the original team behind Lettuce Entertain You Restaurants’ Shanghai Circus in 2004. She began as a Fast Casual General manager for Shanghai Circus in the original Edina location. She then played an integral role in the transition and re-branding of Shanghai Circus to Big Bowl Chinese Express. Rosalyn has been managing the growing group of Big Bowl Chinese Express locations in Minnesota since 2010. In early 2014 Rosalyn opened Tucci Italian, a quick service version of Lettuce’s Tucci Benucch opened in Minnesota serving fresh hand-stretched pizzas and pastas. These concept’s food and operation culture continue to evolve under Rosalyn’s leadership.

“The secret to my success has been hiring passionate people,” says Rosalyn about becoming a Partner at Lettuce. “I’m always looking for individuals who want to challenge themselves and reach beyond their natural ability. I love developing, teaching and coaching people as well as learning from them. Our team inspires me to foster an environment that creates new opportunities for everyone.”

When away from Big Bowl Chinese Express, Rosalyn can be found entertaining in her Chaska, Minnesota home with her husband, Justin, step-daughter Laila and her many pets. She enjoys music, cooking, watching the Minnesota Vikings and is an active member of her community.