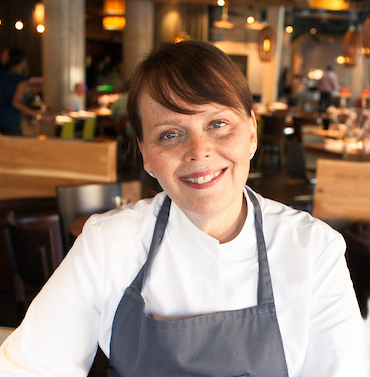 Susan Weaver is the Chef Partner for Mon Ami Gabi, Café Ba-Ba-Reeba!, and Stripburger Division. Since joining Lettuce Entertain You Restaurants in 2003, Weaver has contributed her outstanding talents to the development of the menus and the strength of the culinary teams at Mon Ami Gabi (with locations in Chicago, Oak Brook, Las Vegas, Bethesda, and Reston), Beatrix (Chicago’s Streeterville, River North & Fulton Market neighborhoods), Café Ba-Ba-Reeba! (Chicago & Las Vegas), Stripburger, and Community Canteen.

Her energy and enthusiasm have helped propel these restaurants to the financial success and culinary acclaim they enjoy today. She was instrumental in creating and opening Stripburger Las Vegas in 2007 and is a vital contributor to the creation of her division’s new café concept, Community Canteen, opening in Reston, VA September 2008.

Born in Boston, Massachusetts, Weaver’s passion for food and travel developed early in life. At the young age of 18, her appetite for travel led her on a two-month voyage through Europe. This turned into a two-year stay where she worked various jobs like picking grapes and oranges, peeling potatoes, and washing dishes at a quaint fish restaurant on the island of Corsica in the Mediterranean. These experiences taught her that “working was not just something you did to allow yourself pleasure after work and credits this as the turning point for “setting her career on the right path.”

Weaver apprenticed with world-renowned chefs at the Le Lancaster Hotel in Paris. In addition to her cooking career in Europe, she has spent time in Boston, Houston, Chicago, Toronto, and New York. From 1983 to 2001, Weaver worked for the Four Seasons Hotels and Resorts. She experienced many highlights during her tenure with the Four Seasons, including the first woman named the Executive Chef, and successfully reopening two of the Four Seasons’ restaurants in Canada. In 1994 she moved to New York City and lived there for another 9 years leading Manhattan’s Four Seasons as Executive Chef, where she earned three stars in the New York Times.

With a wealth of experience under her belt and her continuous appetite for creativity, Weaver decided it was time to explore another challenge. In 2003 she met Rich Melman, founder of Lettuce and he asked her to cook for him. After her tasting with Rich, she was immediately hired as the Lettuce Culinary Director for the Mon Ami Gabi and Café Ba-Ba-Reeba! Division of Lettuce Entertain You Restaurants. Adding dimension to her skill set, Weaver was announced partner of Lettuce in July of 2008. She continues to work closely with Rich, CEO Kevin Brown, and Divisional President and Partner, Christopher Meers in expanding and growing restaurant concepts.

Weaver values most her relationship with Christopher Meers as they closely work together on the expansion and development of new Mon Ami Gabi & Beatrix stores and fresh culinary concepts. Weaver is committed to Rich Melman and the Lettuce Partners to deliver innovative, authentic dining experiences with a personal touch…and great food, too!