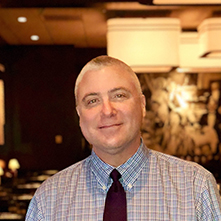 Partner of Wildfire and Big Bowl

Greg Nemeth is a Partner with the Wildfire & Big Bowl Division at Lettuce Entertain You Restaurants.

Born in Chicago but raised in the San Francisco Bay Area, Greg’s passion for food started when he would assist his mom in making dinner as a child. Growing up he worked many different positions at a local iconic restaurant, The Hayward Fishery, and that cemented his hospitality career trajectory.

A graduate of California Culinary Academy, Greg held various leadership positions within the hospitality industry, including with The Santa Barbara Biltmore, Max’s Restaurants of San Francisco, The Northern California Golf Association, The Cheesecake Factory and Granite City.
In 2006, Greg rejoined Max’s Restaurants, as they were looking to expand into the Chicagoland market. He returned to his hometown and opened Billy Berk’s Restaurant & Piano Bar in Westfield’s Old Orchard.
Greg joined Lettuce in 2010 and since then has served as a General Manager at three Wildfire locations, Lincolnshire, Chicago and Glenview where he plays an important role in developing the management team in the Wildfire division.

Greg lives in Western Springs with his wife, Marina and their children, Andrew and Lucia. He loves attending Little League Games, orchestra concerts and dance recitals.